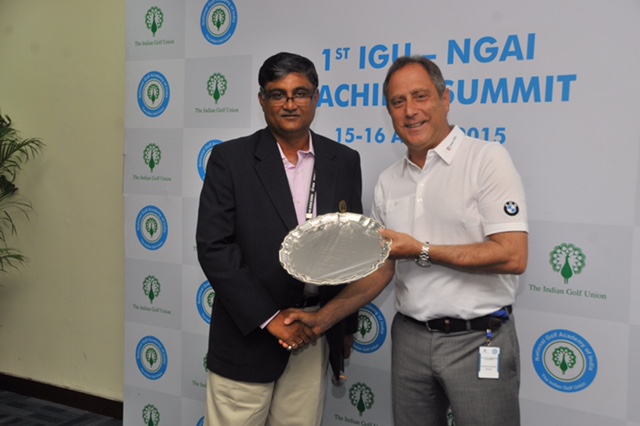 “Through  Donato Di Ponziano’s vision, strong focus and effective leadership, The Indian Golf Union established   ‘the National Golf Academy of India’ almost a decade back. It has created a pool of trained and   dedicated golf coaches. It is the result of his efforts that Indians now compete at the highest level of the game.  It is befitting that NGAI is honouring  Donato Di Ponziano with ‘India’s first Master Teaching Professional’ Title  in  10th year of its inception.”

“We at Indian Golf Union (IGU) and at the National Golf Academy Of India (NGAI) are proud to confer the title: India’s first ‘Master Teaching Professional’ on Donato Di Ponziano for his support in establishing the NGAI, which  hugely contributed towards the scientific training and teaching  of Golf Coaches and resulted in the growth of game in the country.”

Receiving this award today fills me with great satisfaction. I wish to thank the Indian Golf Union who felt that it deserved, Indian golf professionals without which, in truth, I would never be successful in a project so’ ambitious and the Royal & Ancient of St. Andrews for the help he has given and continues to give to the Missionary project of the PGA of Europe.